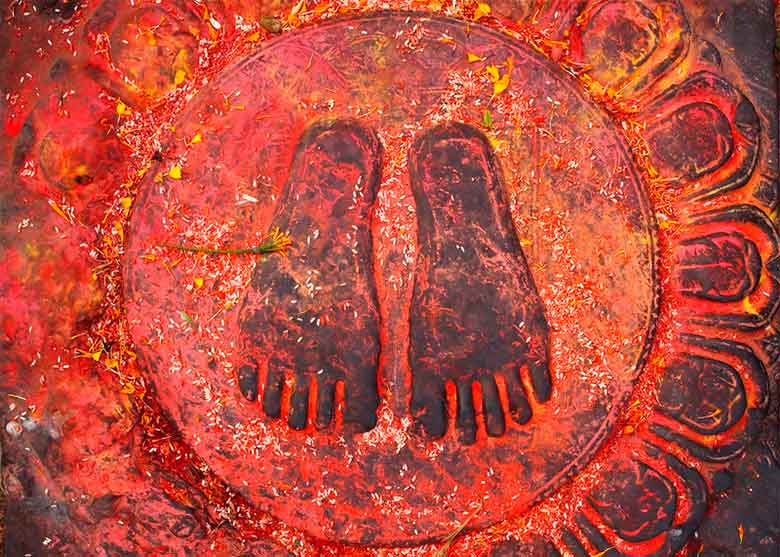 This material was originally compiled by Satipañña Insight Meditation Toronto for the Dharma Study Program.

Note: This material was gathered from translations of the suttas, Access to Insight and other Buddhist websites, and many other sources. Satipañña Insight Meditation Toronto would like to express its sincere and deepest gratitude to all those who made this booklet possible. May it inspire us to delve deeper into the Buddha’s Dhamma.

May all beings find Peace!

The Refuges and Precepts

The Three Characteristics of Existence

Right concentration (Keeping the mind on the object of meditation)

(This set of seven form the core teachings of the Buddha)

1. The Four Foundations of Mindfulness:

3. The Four Bases for Power:

6. The Seven Factors of Enlightenment:

The Four Boundless States (also called the four Brahma-viharas or the Four Boundless Abodes) are considered friends on the way to Nirvana. They help to dissolve the idea of a separate self. They are:

The ‘near enemy’ is a quality that can masquerade as the original, but is not the original. The ‘far enemy’ is the clearly opposite quality. The boundless state serves as an antidote for the quality mentioned as the far enemy.

The Twelve Links of Dependent Origination

All twelve links are interrelated and dependent on each other; thus, there is no beginning or ending point. They are cyclic phenomena. Each link is a cause on the one hand, and an effect on the other.

Ignorance: Ignorance means the lack of right understanding. One is ignorant and takes oneself as real, independent, and a permanent entity or “I.” We do not understand who and what we are or what the universe is. Right understanding allows us to live in accordance with the way things are. Then one can live harmoniously. Ignorance is the condition for mental formations.

Mental Formations: Mental formations arise from ignorance. Mental impurities (the result of past actions of body, speech, and mind) give rise to habitual actions in the present life, which conform to the patterns established in the past (karma). This is why some people are born into more fortunate conditions than others. Mental formations are the conditions for consciousness.

Consciousness: Consciousness arises from mental formations. Literally, it means perceiving, comprehending, recognizing, differentiating, etc. Usually it is interpreted to be our mind. Consciousness is the condition for name and form.

The Six Senses: The six senses arise from name and form. They are eye, ear, nose, tongue, body, and mind. Through these six organs contact with external objects is possible. The six senses are the conditions for contact.

Contact: Contact arises from the six senses. It is the experience created by the six senses, sense objects, and consciousness. Therefore contact is the condition for feeling. Without contact, there is no feeling. Suffering is dependent upon contact because it gives rise to feeling.

Feeling: Feeling arises from contact. It is the affective tone. There are three kinds of feelings, namely: pleasant, unpleasant, and neutral. Feeling is the condition for craving.

Craving: Craving arises from  feeling. Craving is sensuous desire, the pursuit of pleasure, and the identification with attachment to gain and the fear of loss. Craving is the condition for clinging.

Clinging: Clinging arises from craving. Clinging is an attachment to objects. We have the desire to keep something, to possess it permanently. However, all phenomena are impermanent. Therefore we are bound to suffer because of our ignorance. Clinging is the condition for becoming.

Becoming: Becoming arises from clinging/grasping. Becoming means to give birth, create, and exist. Because of attachment to phenomena we assume that there is a self. However, this ‘self’ is conditioned and impermanent. Becoming is the condition for birth.

Birth: Birth arises from becoming. Birth refers to either physical birth or the moment-to-moment arising of renewed consciousness. Birth is the condition for old age and death.

Old Age and Death: Old age and death arise out of birth. Death is one of the greatest afflictions and fears of the untrained, undisciplined worldling. Aging and death are the conditions for ignorance.

The Life of the Buddha

Siddhartha Gautama was born in the sixth century BCE in what is now Nepal. His father, Suddhodana, was the ruler of the Sakya people. Siddhartha grew up living the extravagant life of a young prince. Tradition tells us that Suddhodana had feared that the prince might leave the palace to take up the life of a religious wanderer. So he arranged for his son to be sheltered from all the harsh realities of life. When the prince reached the age of sixteen, Suddhodana arranged for him to be married to his cousin, a charming princess named Yasodhara.

One day, however, Siddhartha ventured out into the world and was confronted with the inevitability of aging, illness, and death. Overcome by dismay, the young prince wondered if there might be a happiness that was not subject to change and decay. Then, seeing a forest wanderer, he decided that only by taking up the life of a spiritual seeker could he find the answer to his question. That night, at the age of twenty-nine, he left his kingdom and newborn son and entered the wilderness.

For six years, Siddhartha submitted himself to rigorous ascetic practices. First he studied with different religious teachers, but, dissatisfied with what they saw as being their highest goal, he set out to practice extreme physical austerities on his own. Yet even through such self-denial, he did not reach his goal. Then one day he remembered a state of calm mental absorption that he had experienced while sitting under a tree as a child, and realized that only through such a state of calm could liberation be found. And yet the strength of that calm could not be reached when the body was weak from practicing austerities. The path to true happiness required balance—or the middle way—rather than the extremes of self-indulgence or self-denial. So on that day he ended his severe austerities and accepted a gift of rice-milk offered to him by a young woman.

That night Siddhartha sat under the bodhi tree and meditated until dawn. In the first watch of the night he remembered his past lives; in the second watch, around midnight, he saw how beings die and are reborn through the power of their karma, which in turn was shaped by the skilfulness of their intentions; in the third watch, toward dawn, he purified his mind of all cravings, attachments, and defilements, and finally of all intentions, both skilful and not. With that, he attained awakening at the age of thirty-five, thus earning the title of Buddha, or “Awakened One.”

For the remainder of his life, the Buddha taught the dharma to others: men, women, and children; rich and poor; people from all walks of life and all levels of society—so that they, too, might attain awakening. He established a sangha, or community of monks and nuns, to maintain his teachings after his death. Then, one full-moon night in May when he had reached the age of eighty, he lay down between two trees in a forest park and gave his last teachings to the assembled followers, counseling them to be heedful in completing their practice of the dharma. With that, he entered total Nirvana .

And when the Buddha had passed away, Sakka, the chief of the deities, uttered the following:

Impermanent are all conditioned things,
They arise and cease, that is their nature.
They come into being and pass away.
Release from them is bliss supreme.

The Five Subjects for Daily Recollection

There are other recollections which one can make and which help one to understand the human condition. People tend to be in denial about decay, disease, and death while remaining greatly attached to sentient beings and insentient objects. Some people try also to neglect moral responsibility for their actions. The recollections below bring these subjects to light and make us face them squarely. Thus, the Buddha has said we should reflect daily upon these five recollections.

Online Meditation Retreat: Practising in the Midst of Uncertainty

Retreat: Save the date